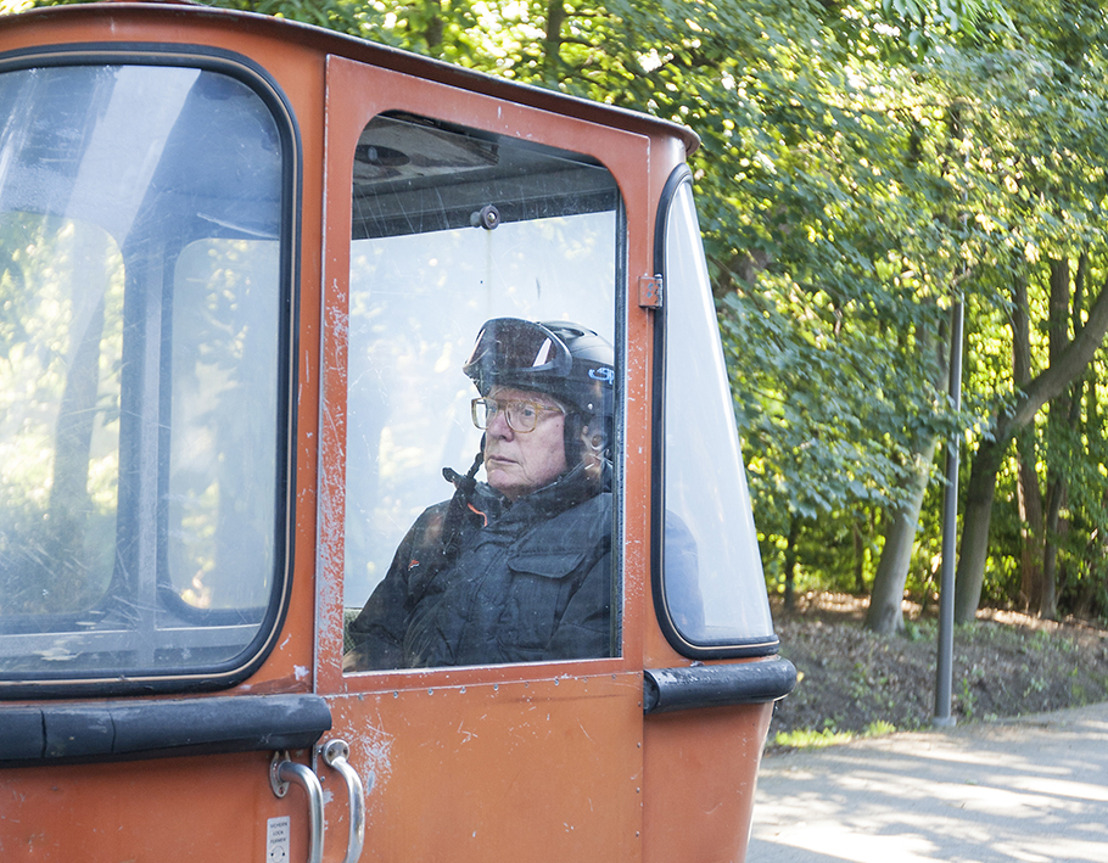 Understanding Roman Signer’s work might seem like a difficult task for the uninitiated. And even those who are familiar with Signer’s oeuvre consider ‘Bidon Bleu’, that has been part of the permanent collection since 2012 as atypical work. The monumental character of this work means it is not often identified with the better-known elements from Signer’s body of work. This solo exhibition is an opportunity to see this piece within the context of his other work. It takes him ever further - one action leads to the next - in a seemingly endlessly meandering journey through impressive natural landscapes and recognisable urban situations.

Risk and danger are part of Signer’s actions, but are never a goal in themselves. They have determined the artist’s reputation, but usually stand in the way of a poetic interpretation of his work. The spectator is often confronted with his own expectations of what he finds meaningful or not.

‘Projet pour un jardin’ links Roman Signer’s international career with his love of Sankt Gallen in Switzerland, where he has lived and worked since 1971. ‘Jardin’ is about something homely, something personal, something familiar. For Signer that is Sankt Gallen and the natural surroundings which are so omnipresent in his work and life. The open air museum is a garden for many urbanites whilst at the same time a public domain. This Antwerp story links the local with the international and, by way of ‘his’ Sankt Gallen, makes a link with all the other locations where Signer’s work can be found worldwide.

‘Stop motion: time as a succession of moments in contrast with the exceptional experience of always one moment’. No art is better suited to the theme of the temporary projects that the Middelheim Museum is putting on in 2016 than the work of Roman Signer. In particular, Signer is the sculptor who has added the dimension of ‘time’ to sculpture.

Signer always works according to the same structure, in three phases. First of all there is the basic form, which already contains the potential to change. Every project contains a moment of tension, a moment in which time seems to stand still, before the action takes place. This action, often steered by the artist himself, is the impetus to the change which comes about in the course of the action. The trace, the residue of the action, is the material artwork.

Dynamic and static moments, both past and future: Signer doesn’t see them as incompatible, but as aspects of one and the same work. Because the phases are clearly defined and their order is fixed, the process can also be mentally repeated and thus also captured in our imagination. So his work encourages the spectator to follow him from the physical to the conceptual.

The permanent work of art ‘Bidon Bleu’, the monumental installation which Roman Signer created for the Middelheim Museum in 2012, is a great example of this. During the action (on 26 May 2012) the artist threw a blue canister, filled with water, from a fifteen metre high slope in space. The container splashed open against the rear wall of a concrete construction. The action comes to a standstill, the water evaporates. The only thing left is the trace: the result of the action, frozen in time. The time interval is constantly supplemented with ‘memories of the action, the suggestion of what has happened’. A second trace is the cinematic report that Signer’s wife Aleksandra makes of every action.

“A change in being fascinates me, from beginning to end. This is how a time sculpture is created” Roman Signer

As part of ‘Projet pour un jardin’ Roman Signer has been working on two new actions. One of which ‘Haben Sie Angst für rot, gelb und blau? Ja, ich habe Angst!’, will be debuted on the first day of the exhibition.

This action consists of red, yellow and blue paintballs, remote-controlled miniature helicopters and a table. With Signer on the remote, the paintballs are dropped onto the table by the helicopter, where the paint leaves behind a permanent trace.

The time sculpture, which is reminiscent of earlier experiments such as ‘Kugel mit blauer Farbe’ (Shangai Biennial 2012), is on show in the Braem Pavilion during the exhibition. The same venue is also screening a cinematic representation of ‘Haben Sie Angst für rot, gelb und blau? Ja, ich habe Angst!’ and a film with previous actions by the artist.

Also in the Braem Pavilion we get to see the result of the action ‘Spuren’ as a temporary installation. This work again contains all the elements which are characteristic of the artist’s work. In a sand carpet we see the traces which Signer has left behind as he zigzagged across it on skis. The journey ends at a ski cabin. There is no trace left of Signer, only his skis in the ski cabin. And the film of the action.

In the video Pendulum (2016), set up in a separate room in the Braem Pavilion, we see the artist's hands rhythmically avoiding a bucket as it swings back and forth like a pendulum. Eventually, the movement ceases, and bucket and hands meet.

‘Projet pour un jardin’ is not just the name of the exhibition and the book about it; it is also the title of a new, permanent work that Roman Signer has made especially for the Middelheim museum. The steel work has a surface area of four by eight metres and is 130 cm high. It looks like a detail of a maze and, when looked down on from above, is reminiscent of the zigzag silhouette of ‘Spuren’ (2016).

In ‘Projet pour un jardin’ it is not Signer, but the visitor who is the central figure in the experiment, who can decide on the journey he embarks upon – in which from above it looks like the head has been separated from the torso. Taller people might have to walk through here with their knees bent. Not as a lesson in humility – in Signer's work there is no room for power or domination – but possibly a symbolic reference to ‘separating the head from the body’, the separation of the emotional from the rational.

In this new project time starts whenever someone begins the journey. That results in another form of experience of time: the personal, physical experience. In that respect the two works from the collection, ‘Bidon Bleu’ and ‘Projet pour un jardin’, complement each other well with ‘Projet pour un jardin’ as a binding element between ‘Bidon Bleu’, the park and the solo exhibition.

Sculpture according to Signer

In the beginning of his career, in the 1970s, Roman Signer carried out research into the visualisation of natural phenomena with almost scientific precision. The basic properties of water, sand and stone, executed in 3-D. He also transformed fire, rockets and explosions into ephemeral actions, or used their power to transform tables, chairs, beds, wooden balls or blue barrels. Other things on his list of favourite props include plastic lint, paint, clay, paper, wooden poles, skis, a kayak, a scooter and a ventilator. The objects, which are each time used in different combinations, have undergone a meticulous selection over the years.

With this limited number of elements Signer sculpts a world which never fails to amaze the spectator. His work makes an important contribution to the tradition of ‘Process Art’ and he single-handedly rewrites the definition of sculpture. With the concepts of ‘action’, ‘distribution in space’ and ‘time’ he has added three new dimensions to it.

Through his work he tackles time in diverse manners: ‘Action with a Fuse’ (1989) lasts 35 days, the closing event of Documenta 8 (1987) lasts just a few seconds. ‘Vitesse: 2000 metres/ second’ (1992) is literally about an enormous acceleration. Sequence, simultaneity, duration, the immediate, continuity, perseverance and rhythm are all ways of giving shape to his images.

Roman Signer combines natural elements such as water, wind, earth and fire with simple props such as rockets and balloons. The result is often surprising, absurd and poetic. Water is perhaps the most common element in Signer’s work. The fascination with water has never left this man who grew up on the banks of a river. The ‘meander’ pattern of a natural stream can also be seen in his new work ‘Spuren’ and ‘Projet pour un jardin’. His frugal choice of materials is in sharp contrast with the highly imaginative way he develops his projects. The result is a contrary oeuvre that makes no concessions to trends or aesthetic expectations.

Even though his actions are not functional, his oeuvre expresses a great interest in reality outside the art world. In addition, his actions - without a role but also not without danger - can be seen as symbols or metaphors for an existential questioning: “I need to enter into confrontation with the ephemeral. Perhaps that’s because I’m sensitive to tragedy, the absurd, futility and meaninglessness which we as human beings are responsible for.” (R.S., Venice Biennale, p. 37). Signer uses small things to set something in motion which you can reflect upon in a broader context and which everyone can relate to.

Who is Roman Signer?

Roman Signer (°1938) lives and works in Sankt Gallen, Switzerland. For more than 30 years his work has been exhibited in galleries and museums in Europe, North America and Asia and has been selected for prestigious art events such as the Venice Biennale, Documenta 8 in Kassel and Skulptur Projekte in Münster. In the past forty years he has participated in hundreds of solo and group projects, including Documenta 8, Skulptur Projekte Münster and the Swiss Pavilion of the 48th Venice Biennale. His work can be found in major collections (Kunsthaus Zug has more than ninety works in its possession) from Tasmania to Mexico. He has also created various works for public spaces, in particular in Switzerland, such as ‘Tirsch’ (2008, Appenzell), ‘Koffer’ and ‘Drei Farbkanonen’ in Zurich (both in 2007). Even though his work is exhibited throughout the world, he has a particular bond with the Kunstmuseum St.Gallen. A considerable share of his oeuvre can be found there, in his own back garden.