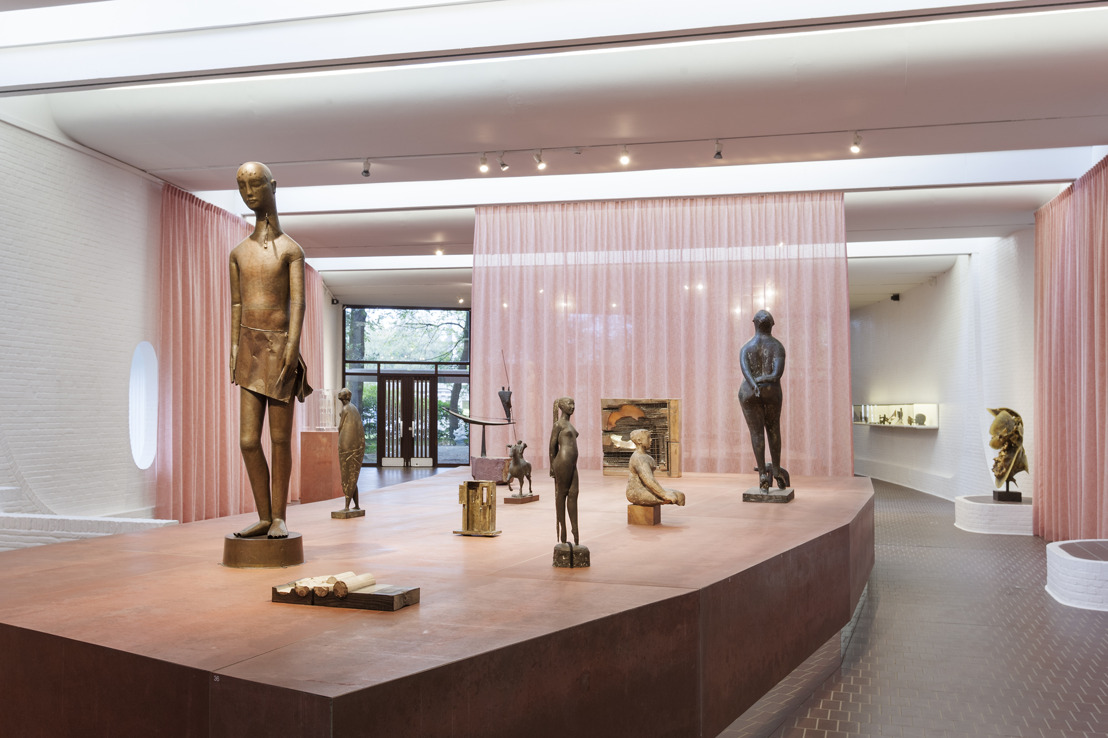 The RECALL SCULPTURE exhibition focuses on table-top sculptures, with examples from figurative and abstract art from the 1950s to the 1970s. It was during this period that artists broke free from the oppressive straitjacket of the war years. Creative and artistic freedom were at a premium, and this resulted in a wide variety of materials and themes, which was in sharp contrast with the imposition of government restraints on art during the war.

The 41 works are characterised by enormous diversity: the artists sought to create timeless work, detached from any frame of reference, or reacted to society by expressing the horror of military conflict through their art. The wars in Korea (1950-53), Indochina (1946-54) and Algeria (1954-62) were no less horrific than the Second World War. Subject matter and the artist’s frame of mind determine technique and material, ceramics start to be used, and the boundaries between two and three dimensions become blurred.

Figurative, abstract or informal; heavily burdened or light as a feather; within or outside an artistic movement; reacting to society or detached from any referential framework: the small sculptures of RECALL SCULPTURE are also and above all a forerunner of contemporary art. The works of Pietro Consagra (1920-2005), Arnoldo Pomodoro (born 1926), Francesco Somaini (1926-2005), Elisabeth Schaar (1908-1975), Bernhard Heiliger (1915-1995), Marino Marini (1901-1980) and others are therefore displayed in a perfect setting in the Middelheim. And in a way, they are also coming home for a while.

A place of encounter

On 1 June 1950, two years after the very first ‘modern’ open-air sculpture exhibition in Battersea Park and one year after the international sculpture exhibition in Park Sonsbeek, the International Exhibition of Sculpture 1900-1950 opened in Antwerp’s Middelheim Park. In his opening speech, Mayor Lode Craeybeckx explicitly referred to the recent wartime past of the Middelheim site: Where stupidity and hatred destroyed, works of the human spirit, born in many countries, have found a place of encounter. The ambition was lofty: the year 1950 was taken as a suitable moment to document an overview of half a century of modern sculpture. The aim was to include as many styles and nationalities as possible.

During the opening of the exhibition, the artist Ossip Zadkine supposedly told Craeybeckx: How bereft you will feel when all this beauty has gone away! The idea quickly arose of making the exhibition permanent in the form of a public open-air museum for sculpture, the first of its kind in the world. On 6 November 1950, just one month after the exhibition’s closure, Craeybeckx’s proposal was approved by the Antwerp city authorities.

As had been the case with the exhibition, the ambition for the museum was lofty. It was to offer an overview of international contemporary sculpture, also paying attention to the main precursors of the late 19th and early 20th century. Craeybeckx soon began forming contacts with a view to the first purchases, and in the coming years the mayor continued to make museum and workshop visits in person and cultivate contacts in order to expand the collection.

As well as leading to the idea of a permanent collection, the successful exhibition of 1950 in the Middelheim Park also gave rise to a plan for periodic presentations. These ‘international exhibitions of sculpture’, held every two years, became known as the Middelheim Biennials from 1953 onwards. Their purpose was to monitor the pulse of contemporary art. The last Middelheim Biennial took place in 1989.

Mayor Lode Craeybeckx was also chairman of the board of directors of the Royal Museum of Fine Arts Antwerp (KMSKA). Together with Walther Vanbeselaere, the KMSKA’s head curator, now that the Second World War was over he wanted the KMSKA to expand its collection to include contemporary art, a trend followed by many museums at that time. In 1950, Craeybeckx and Vanbeselaere visited the Venice Biennale, which proved to be a source of inspiration for both museum collections.

For the KMSKA, the Middelheim Biennials were an equally important source of information and inspiration. At these successive two-yearly events, the KMSKA acquired fifty small-scale sculptures. In addition, the museum gave out a number of large sculptures from its own collection on long-term loan to the Middelheim – iconic works such as Rik Wouters’ Het zotte geweld and Auguste Rodin’s Balzac. These masterpieces have remained among the Middelheim Museum’s most important works until the present day.

‘The connection between the KMSKA and the Middelheim is a lasting one. Obviously, that’s because the works of Rodin, Wouters and others from the KMSKA collection have found such a beautiful setting at the Middelheim. In addition, in the near future KMSKA wants to re-evaluate and redesign its own museum garden, and there will be a prominent role for (contemporary) sculpture. Within the walls of the revamped KMSKA, sculpture past and present will be given more space.  It goes without saying that both of these courses of action will involve collaboration with the Middelheim Museum.’
– Manfred Sellink, general director and head conservator of KMSKA

‘The connection between the Middelheim Museum and the KMSKA was ripe for rediscovery. Increasing the visibility of the systematic cooperation between the two makes it clear how vital such dialogues can be between institutions in a city. And that's something on which a future can be built. Works from the KMSKA have occupied a central place in the Middelheim’s collection since its opening. This project puts that presence into context. It also offers a glimpse of the delights we can expect when the KMSKA opens the doors once again.’
– Sara Weyns, director of the Middelheim Museum

‘An urban cultural policy is a multi-faceted venture. It's absolutely fantastic that this project has reaffirmed and renewed the collaboration between two major cultural entities in Antwerp: the Middelheim Museum and the KMSKA. It’s an example for all of us.’
– Caroline Bastiaens, Alderman for Culture