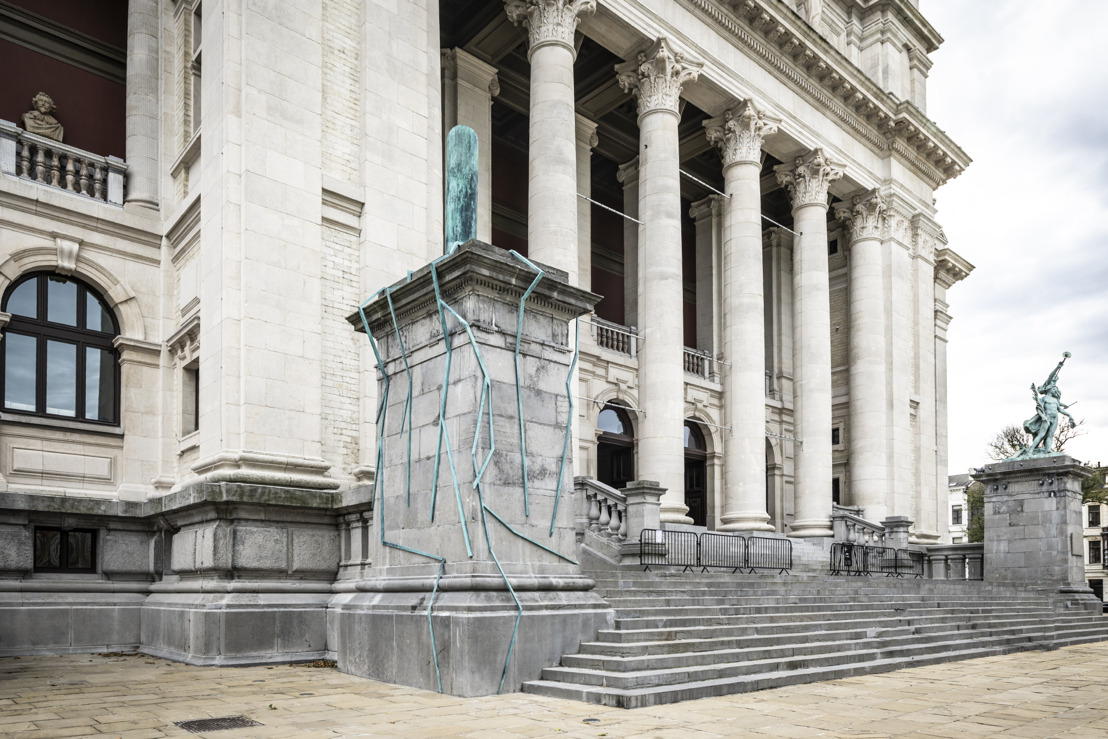 The Antwerp Public Art Collection proudly presents Mimesis, a new monumental sculpture by artist Lili Dujourie (°1941, Roeselare, Belgium), commissioned by the city of Antwerp on the occasion of the reopening of the Royal Museum of Fine Arts Antwerp (KMSKA) in the autumn of 2022.

Mimesis is the first work that Lili Dujourie makes for public space, as well as her first work made in bronze. Dujourie's sculpture makes unexpected use of the plinth that flanks the left side of the museum's monumental steps. Traditionally, pedestals serve to create a distance between the sculpture and the viewer, between the artwork and the 'ordinary world'. Here, however, the work of art reaches down to the ground: it takes root in the Leopold de Waelplaats and finds firm soil in the shared public space of the city. Dujourie thus connects the museum with the world and shortens the distance between the street and the grand museum building.

“We are extremely proud to be the first city to ever welcome a public artwork by Lili Dujourie. As one of the leading artists of her generation, no one is more suited to transform this unique historic location than her.” – Nabilla Ait Daoud, Alderman for Culture

Lili Dujourie's work was selected from three proposals made by internationally renowned artists who were asked to submit a design for this site-specific commission. The jury consisted of representatives from Kunst in de Stad – Middelheim Museum and KMSKA, as well as external jury members Amira Gad and Joachim Naudts. Mimesis was realized in collaboration with Bart Spillemaeckers. Bronze foundry Art Casting was responsible for the production and installation. The artwork is part of the Antwerp Public Art Collection, the municipal collection of artworks in the public space of Antwerp.

The clean-cut lines of the bronze tree roots refer to drawing and painting, here not set on paper or canvas, but against a background of Belgian blue stone. The colour and texture of the sculpture are in harmony with the other works of art in the immediate vicinity: Fame by Léon Mignon on the opposite pedestal (1896, also called Homage to Antoon van Dyck, collection KMSKA) and Deep Fountain by Cristina Iglesias (2006, Antwerp Public Art Collection) in front of the museum. With the latter, Mimesis also shares a reference to nature and organic forms.

Nature, together with the human form, is perhaps the most inspiring motif in Western art history. And just as the painted or sculpted bodies present in the KMSKA collection are not a realistic representation of the average human body, but rather convey an idealised image, nature also has long been the subject of the artistic pursuit of perfection. This tradition of representing an ideal world is termed art historically with the ancient Greek word mimesis.

Lili Dujourie's new artwork refers to this tradition and is also an extension of it. She does not offer an idealized or naturalistic imitation of a tree, but rather the representation of the thought of a tree. The thought of tree roots that, whilst unseen, have been part of a millennia-old vital system. A global underground network of collaboration and healing. That which normally remains invisible now becomes the object of reflection and observation.

Symbol of growth and origin

The bronze network of tree roots that "grows" over the plinth carries many symbolic associations that will grow over time and grow with the city and the museum. By having her work take place on and alongside the pedestal, Dujourie shows that a museum can be a source of life. The roots also refer to the past as fertile ground: just like the roots, (art) history is erratically branched and therefore always multiple, not rectilinear. Roots are a strong symbol of origin and inspiration, of nourishment and growth. If museums are depositories of heritage, we must not forget that this heritage too has a complex and intricate history that stems from divergent roots. The motif of the tree also evokes an ecological reading of the work, in which nature is evoked as a primal force in relation to human culture.

The work of Lili Dujourie (°1941, Roeselare, Belgium) mixes influences from Flemish Primitives such as Jan Van Eyck with her personal artistic approach, departing from the late 1960s. Dujourie is both a solitary and central figure in Belgian art. Her core themes are the relationship between nature and culture, the passage and weight of time and her search for an emotional understanding of space. Her sculptural interventions fight a battle between painting and sculpture, between abstraction and figuration and between their physical presence and their environment. She works in marble, papier-mâché, steel, lead, velvet and ceramics, giving decoration and ornament a central role and playing with the sensuality and directness of the materials.

Dujourie was Laureate of the Flemish Culture Prize for Visual Arts in 2015. Her work is collected by leading Belgian and international museums, as well as private collections.

Every year the Museum sends out an invitation to renowned and promising artists. Freed from the typical “white cube” of a museum hall, the artists interact with the endless opportunities offered by the park and the existing collection. This inspires them to create new work, custom-made for the Middelheim Museum. In the past, the Museum has already collaborated with Berlinde De Bruyckere, Kapwani Kiwanga, Camille Henrot, Ulla von Brandenburg, Jeremy Deller, Sammy Baloji, Michel Francois, etc.

With an annual average of 400,000 visitors and free entry, the Middelheim Museum is a gateway to modern and contemporary art for young and old, from nature lovers to art experts. Culture and recreation come together in perfect harmony.